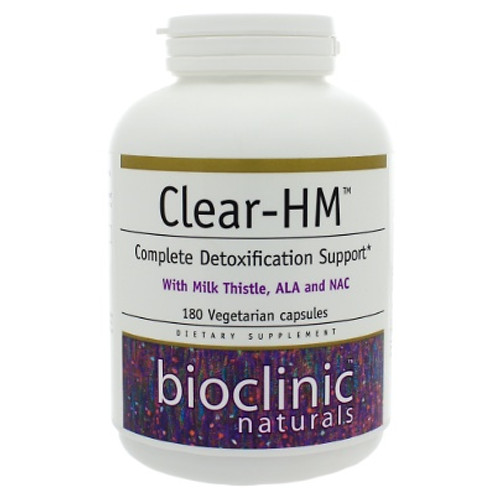 SKU:
BS0017
UPC:
629022092208
Condition:
New
Availability:
In Stock
Disclaimer:
These statements have not been evaluated by the Food and Drug Administration. This product is not intended to diagnose, treat, cure, or prevent any disease.

Clear-HM provides advanced heavy metal detoxification support, supplying nutrients
which increase glutathione levels, assist in heavy metal removal, improve antioxidant
status and protect against cellular and hepatic damage. N-acetyl cysteine (NAC) and
alpha-lipoic acid both increase cellular levels of glutathione, which binds to mercury and
reactive oxygen species and participates in the detoxification of many xenobiotics via
conjugation reactions. They are also powerful antioxidants and have been found to
reduce toxicity to multiple organs from lead, arsenic, mercury and cadmium.

Spirulina platensis is a potent free radical scavenger, found to protect against heavy metal
induced organ damage and to prevent anemia, leukopenia and the deposition of heavy
metals in the brain. Spirulina also contains significant amounts of alkaline phosphatase
activity, which may assist in the detoxification of organophosphorus pesticides. Vitamins
B6 and C are required for the synthesis or regeneration of glutathione, with the latter
providing broad antioxidant support minimizing heavy metal toxicity. Milk thistle is a
well established hepatoprotectant, and magnesium, often deficient in those with toxin
exposure, provides an essential cofactor for many detoxification and mitochondrial
enzymes.