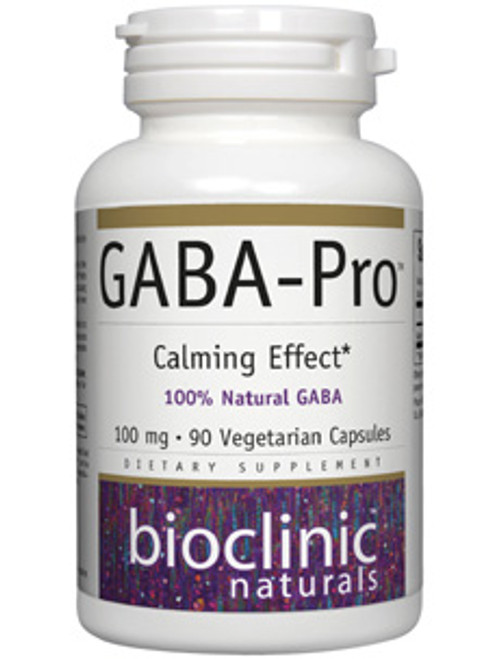 SKU:
BC9284
UPC:
629022092840
Condition:
New
Availability:
In Stock
Disclaimer:
These statements have not been evaluated by the Food and Drug Administration. This product is not intended to diagnose, treat, cure, or prevent any disease.

Gamma-amino butyric acid (GABA) is one of the major inhibitory neurotransmitters in the central nervous system, balancing the excitatory effects of glutamate on neuronal activity. The inhibitory effects of GABA are generally considered to lessen anxiety, relax muscle tension, and have sedative-like effects. In addition, conditions such as anxiety, depression, insomnia, and epilepsy have all been associated with low GABA concentration or activity. GABA has also been shown to cause a significant increase in alpha brain waves compared to control, indicative of a more relaxed state, as well as better concentration. In a clinical trial involvingpatients with a fear of heights, GABA-Pro was found to increase salivary levels of sIgA while crossing a suspension bridge, as compared to the control group whose salivary IgA levels dropped 35%. This is indicative of the stress-reducing effect of GABA-Pro. Increasing GABA activity is also a therapeutic target for many medications used in the treatment of insomnia, often by targeting GABAA receptors. This has the effect of decreasing waking, shorten sleep latency, and increasing slow-wave sleep.BenefitsFast acting due to its natural form, effects can be felt in as little as five minutes and can last from four to six hoursGABA-ProTM uses PharmaGABA, , a naturally-sourced form superior to that of synthetic GABA. It is naturally manufactured via a fermentation process that utilizes Lactobacillus hilgardii, the bacterium used to ferment vegetables in the preparation of the traditional Korean dish known as kimchi.Complements other anti-stress supplements, improving calmness and relaxation while coping with daily stress and reduces the negative effects of caffeine consumptionGentle and non-addictive with virtually no side effects, unlike pharmaceutical GABA-enhancing medicationsEasy-to-swallow and highly bioavailable vegetarian capsule