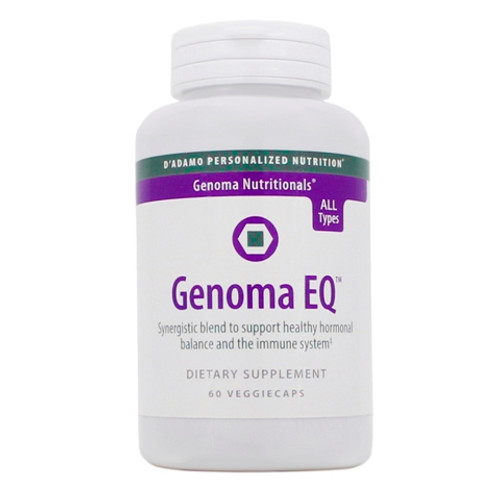 SKU:
DD0044
UPC:
Condition:
New
Availability:
In Stock
Disclaimer:
These statements have not been evaluated by the Food and Drug Administration. This product is not intended to diagnose, treat, cure, or prevent any disease.

Genoma EQ is a synergistic blend of herbs that supports healthy hormonal balance.

The main ingredient in Genoma EQ is an extract from the root of the Stinging Nettle plant (Urtica dioica). Nettle root has several important healthful effects:

Proper hormone balance: Nettle root that has been used in Germany for more than a decade to treat prostate enlargement, has been shown to reduce symptoms by 86% after 3 months of use. This effect has been confirmed by numerous supportive studies. Some chemical agents of nettle root are able to block the enzyme 5a-reductase, which is responsible for the formation of DHT from testosterone - the main villain involved in the development of male-pattern hair loss in men and stress-induced hair loss in women.

Saw Palmetto Berry (Serenoa repens): The herbs rich in fatty acids and phytosterols. It has been used in traditional, eclectic, and alternative medicine for a variety of indications, most notably benign prostatic hyperplasia.

Chamomile Flowers (Matricaria recutita): Chamomile contains the antioxidant flavone apigenin. Apigenin has been shown to promote a healthy level of the enzyme aromatase, critical for maintaining a healthy balance of estrogens and androgens in the body.