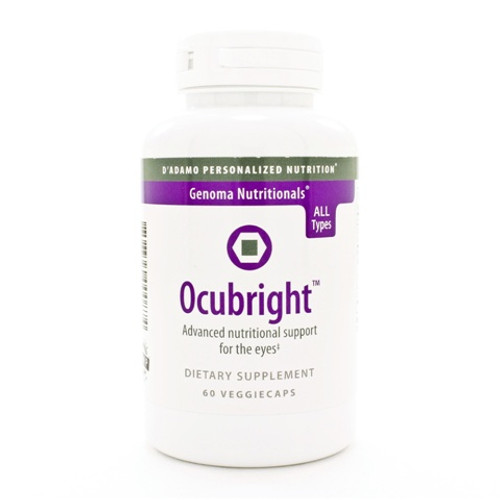 SKU:
DD0054
UPC:
858394000874
Condition:
New
Availability:
In Stock
Disclaimer:
These statements have not been evaluated by the Food and Drug Administration. This product is not intended to diagnose, treat, cure, or prevent any disease.

We are pleased to reintroduce Ocubright, a stellar botanical-vitamin formula designed to promote healthy visual function. It was reformulated by Dr. Peter DAdamo to support visual acuity and eye health, and it is a blend of six ingredients that have been well-researched for their role in supporting visual health and vitality.

Highlights of the Ocubright formulation include:

Lutein and Zeaxanthin: Lutein is a carotenoid typically found in conjunction with zeaxanthin. Studies suggest that high consumption of lutein reduces the risk of developing age-related macular degeneration and cataracts. Foods containing high concentrations of luteins, such as broccoli, spinach and kale are associated with the greatest eye effects.

Bilberry: The bilberry leaf and fruit contain powerful anti-oxidants known as anthocynanadins, which decrease vascular permeability, and have anti-inflammatory and anti-edema effects. Laboratory studies have provided evidence that bilberry consumption enhances the health of the center visual field (macula) of the eye.

Taurine: Found in high concentrations in the eye, Taurine is the most plentiful amino acid in the retina of all animal species. Taurine has multiple functions in maintaining normal retinal structure and function. Taurine deficiency has been linked to retinal degeneration.

Zinc: Zinc is an essential trace element. One of the most important roles it plays is in the maintenance of vision. It is present in high concentrations in the eye, particularly in the retina and choroid. Zinc deficiency can alter vision, and severe deficiency causes changes in the retina and retinal pigment epithelium (RPE).

Copper: An essential trace mineral, copper is widely distributed in foods, particularly seafood, nuts, seeds, wheat bran cereals, and grain products. As zinc can inhibit copper absorption in the body, a small amount of copper has been added to the formulation to maintain healthy copper levels.

Eyebright (Euphrasia): Its medicinal properties include antibacterial and astringent properties, and it has long been used by Western herbalists as an eyewash to soothe burning and tired eyes. The synergistic actions of the six ingredients in Ocubright provide general eye health, sharpness of vision, and provide protection from photodamage.