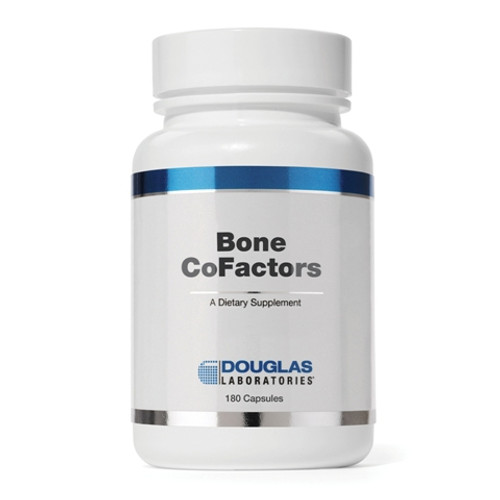 SKU:
DL0808
UPC:
310539039557
Condition:
New
Availability:
In Stock
Maximum Purchase:
2 units
Disclaimer:
These statements have not been evaluated by the Food and Drug Administration. This product is not intended to diagnose, treat, cure, or prevent any disease.

Bone CoFactors is formulated to provide the necessary vitamins and minerals combined with a milk protein fraction called MBP® that helps to support bone strength. MBP has the distinctive function of balancing osteoblast and osteoclast activity, which complements the function of other nutrients in Bone CoFactors for optimized bone health.†

FUNCTIONS Bones are constantly being remodeled, not only during the growth stages, but also into adulthood. This process of bone turnover involves two types of cells: osteoblasts and osteoclasts. Osteoblasts promote bone formation and create collagen, so that calcium can effectively adhere to the collagen and create new tissue. Osteoclasts destroy old bone tissue by releasing acid and enzymes to dissolve calcium and collagen. However, osteoclasts can become excessive due to hormonal imbalances and other factors, leading to calcium deficiency in the bone. Therefore, nutrients that suppress excess osteoclast activity and support osteoblast activity are important to the health of the bones. MBP is a milk protein fraction that is found in human and bovine milk and has been clinically shown to support the formation of healthy bones. It is a highly bioactive fraction of total milk protein content consisting of 97.2% lactoferrin and lactoperoxidase, with the remaining 2.8% as other milk proteins, cystatin C, HMG-like protein, and kininogen fragment 1.2. Unlike other bone substances such as Vitamin K, MBP increases the number of bone-forming osteoblast cells and regulates the activity of bone-destroying osteoclast cells (see chart, page 2). Therefore, MBP is a multifunctional protein that functions by acting directly and/or indirectly on bone cells to promote the bone formation, while at the same time inhibiting excess bone destruction, called bone resorption. Because bone metabolism proceeds at an extremely gradual pace, it may take 3 to 6 months or longer to notice improved bone metabolism with supplementation. In a study conducted with 33 healthy adult women, BMD (bone mineral density) increased by 3% in the control group after 6 months of ingesting 40 mg of MBP® daily. Another clinical study performed with 32 post-menopausal women consuming MBP daily for 6 months, the mean lumber BMD significantly increased and Urinary cross-linked N-telopeptides (NTx) of type I collagen were significantly decreased, resulting in positive bone metabolism.† Calcium supplementation through dietary sources and supplementation is important for bones, but it is merely the material used to form bones. It is osteoblasts that actually form bones. Therefore, no matter how much calcium one ingests, if bones are not receptive to the calcium, it isn’t fully incorporated into the bones. MBP can help the body utilize the calcium ingested. Vitamin D helps to facilitate calcium absorption and transport. Vitamin D can increase the expression of osteocalcin and other important compounds from osteoblasts to help support bone formation; it can also help to breakdown bone and mobilize calcium to other tissues in the body. Numerous scientists now feel that supplementation with vitamin D at levels greater than previously thought necessary is critical to helping maintain healthy bone remodeling as we age.† Vitamin K2 is not commonly found in the diet. Human studies show that vitamin K plays important roles in bone health; it has been shown to decrease calcium excretion and is involved in gamma-carboxylation of osteocalcin. Osteocalcin, a protein found in the extracellular bone matrix is important for healthy bone formation as it facilitates the carrying of calcium out of blood vessels and binding it to hydroxyapatite (bone matrix). Vitamin K2 (as menaquinone-7) is more bioactive and has proven more effective than vitamin K1 and other menaquinones. Furthermore, the study showed better utilization and improved osteocalcin carboxylation for MK-7 after 6 weeks. C