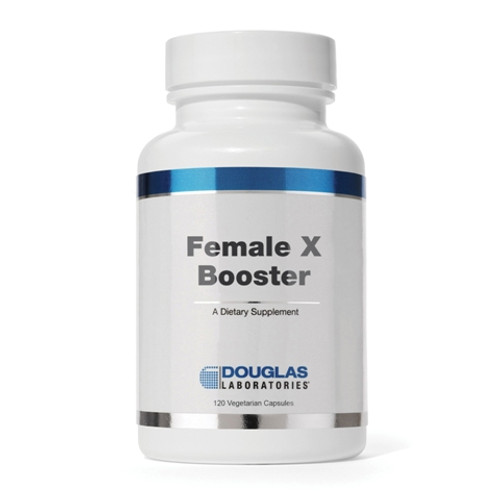 SKU:
DL0848
UPC:
310539977712
Condition:
New
Availability:
In Stock
Maximum Purchase:
2 units
Disclaimer:
These statements have not been evaluated by the Food and Drug Administration. This product is not intended to diagnose, treat, cure, or prevent any disease.

The Female X Booster formula supports many of the physiological mechanisms involved in maintaining female sexual health.† These include the support of general vascular function, healthy stress responses, and overall wellbeing.* Black cohosh (Cimicifuga racemose) supports physical and sexual drive in post-menopausal women, as indicated by the “sexuality domain” of clinical reporting scales used in studies.* Panax Ginseng may have mild estrogenic effects on reproductive tissues in addition to its ability to moderate the effects of stress on the nervous system, a function that is shared by other adaptogens in this formula, such as Eleutherococcus senticosus (Siberian Ginseng) and Ashwagandha (Withania somnifera). In traditional medicine, Muira Puama (Ptychopetalum olacoides) is a traditionally used Brazilian adaptogen to support arousal.* In a small, randomized trial women presenting with hyposexual desire disorder took 7.5 mg of Tribulus terrestris daily for four weeks along with a placebo group. After four weeks the trial group showed improvements in the Female Sexual Function Index areas of desire, arousal, lubrication, satisfaction and comfort domains.*