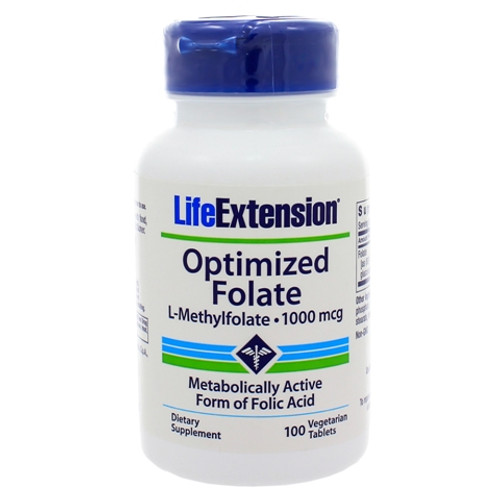 SKU:
LX0004
UPC:
737870193913
Condition:
New
Availability:
In Stock
Disclaimer:
These statements have not been evaluated by the Food and Drug Administration. This product is not intended to diagnose, treat, cure, or prevent any disease.

Those who take ordinary folate supplements, however, may not be experiencing its full spectrum of effects. This is because once ingested, not everyone converts folate to its biologically active form called 5-methyltetrahydrofolate (5-MTHF).190 Research shows that in a large proportion of the population, genetic enzyme deficiencies prevent the conversion of folate to 5-MTHF, leaving many vulnerable to low blood folate levels (and higher than desired homocysteine).

A more useful approach is to take the bioactive folate 5-MTHF directly, which has been declassified as a drug and is now available as a dietary supplement. 5-MTHF has been shown to dramatically raise red blood cell folate concentration, an indicator of folate status191 compared with folic acid supplementation. This bioactive folate is up to seven times more bioavailable than folic acid. This greater bioavailability is especially important in people who have a genetic enzyme deficiency192 since it requires no conversion to become metabolically active.

People with elevated homocysteine levels have a greater risk of cognitive decline.194 Unlike folic acid, 5-MTHF is able to cross the blood-brain barrier, which is especially important for people with cognitive difficulties to enhance the synthesis of acetylcholine in the brain — the neurotransmitter associated with memory.

Studies also show that the effectiveness of 5-MTHF can be further enhanced by co-supplementing with methylcobalamin (the active form of vitamin B12), 195 vitamin B6, and riboflavin.196, 197