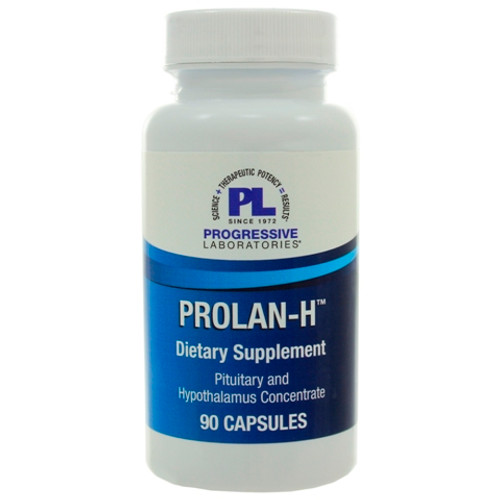 SKU:
PL0200
UPC:
351821007564
Condition:
New
Availability:
In Stock
Disclaimer:
These statements have not been evaluated by the Food and Drug Administration. This product is not intended to diagnose, treat, cure, or prevent any disease.

Prolan-H by is available by Progressive Labs. The pituitary gland is located in the sella turcica at the base of the brain. It consists of two distinct lobes, the larger, oblong anterior, and the smaller, round posterior lobe. The anterior lobe is responsible for growth and development while the posterior lobe regulates blood pressure, stimulates the contraction of smooth muscle (as in the dilated uterus), and promotes peristalsis. The pituitary is often called the ""master regulatory gland"" of the body. The hypothalamus is one of the major areas of the brain associated with control of the autonomic nervous system and of certain behavioral responses. In all cases, the organism is exhibiting a pattern of responses to external stimuli. Such stimuli include environmental temperature, food, water, and stressful situations. The sensory system sends stimulatory messages to the hypothalamus, where such messages are sorted out, and the appropriate response occurs. Appropriate responses may involve only the hypothalamus directing the proper centers of the brain (sleep, hunger and thirst), or they may involve stimulation of one or more glands by factors released from the hypothalamus. In most cases, responses will involve stimulation of the brain and a variety of glands, resulting in physical activity of various kinds. Release factors which originate from the hypothalamus cause the production of the following hormones from their respective glands (in parenthesis). Catecholamine (adrenal medulla), vasopressin (posterior pituitary), oxytocin (posterior pituitary), thyroid-stimulating hormone, adrenocorticotropic hormone, follicle stimulating hormone, luteinizing hormone and prolactin (the last five originate in the anterior pituitary). It is easy to understand why the hypothalamus is considered to be the ""master regulator"" of the body, since the glands which it regulates exert multiple effects on the