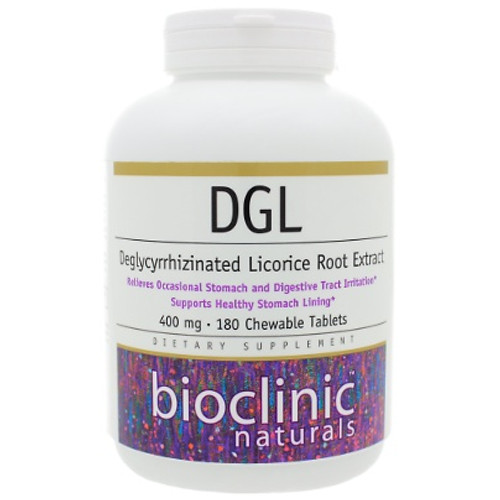 SKU:
BS0055
UPC:
629022092277
Condition:
New
Availability:
In Stock
Disclaimer:
These statements have not been evaluated by the Food and Drug Administration. This product is not intended to diagnose, treat, cure, or prevent any disease.

Deglycyrrhizinated licorice, or DGL, has been used clinically for decades, primarily for the treatment of peptic ulcers.1 Licorice has been shown to inhibit several inflammatory enzymes, including both cyclooxygenase-2 (COX-2) and 5-lipoxygenase (5-LOX), decreasing the production of several potent inflammatory compounds, including prostaglandin E2, thromboxane B2, and leukotriene B4. Importantly, this inhibition is not due to glycyrrhizic acid, the component of licorice which has been removed in DGL, and which is associated with mineralocorticoid excess and hypertension.2 Another component of licorice, glabridin, has been shown to prevent lipopolysaccharide (LPS) induced production of inflammatory compounds, including nitric oxide and interleukin-1 beta, whereas glycyrrhizic acid has no effect.

Clinically, DGL has been shown to have comparable efficacy to cimetidine for both the healing and prevention of ulcer recurrences.3 Additionally, extracts of licorice have been shown to inhibit the adhesion of H. pylori to gastric mucosa, as well as the growth of antibiotic resistant strains, suggesting multiple mechanisms of action for its anti-ulcer benefit.4, 5 The use of chewable tablets appears necessary for DGL’s efficacy, as it allows for distribution and absorption by the gastric mucosa.3