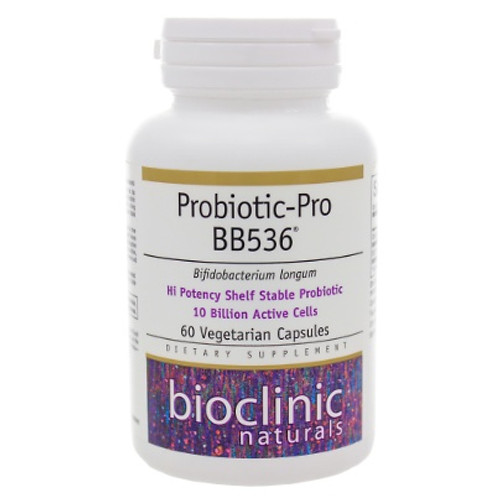 SKU:
BS0036
UPC:
629022094592
Condition:
New
Availability:
In Stock
Disclaimer:
These statements have not been evaluated by the Food and Drug Administration. This product is not intended to diagnose, treat, cure, or prevent any disease.

Probiotic-Pro BB536 is a high potency probiotic, containing 10 billion cfu (colony forming units) per capsule of the species Bifidobacterium longum BB536, one of the most researched in the world. It is supported by more than 70 scientific reports, including 35 human clinical trials. It is a proprietary strain which has a shelf life remarkably longer and more stable than other probiotic supplements, with a survival rate of over 80% after 1 year at 25° Celsius, over 4-fold higher than other competitive strains.

Isolated from healthy human gastrointestinal (GI) tracts, Bifidobacterium longum has long been recognized to be a beneficial species, constituting over 90% of total GI bacteria in breast-fed infants. It has been shown to have multiple immunomodulating effects, such as increasing the production of secretory IgA and activity of both NK cells and neutrophils, as well as balancing Th1 and Th2 immune activity. It also has been shown to enhance mucosal barrier function in patients with ulcerative colitis, partly by up regulating tight junction molecules. In clinical trials, supplementation with BB536 has been shown to reduce allergic symptoms, decrease influenza infection, lower serum cholesterol levels and improve symptoms of inflammatory bowel disease.

Unique Features
• High potency: 10 billion cfu (colony forming units) of Bifidobacterium longum BB536 per capsule
• Incredibly shelf stable: over 80% survival rate at 1 year at 25° Celsius – Does not require refrigeration
• Specially formulated with a unique technology to resist disruption in the acidic conditions of the stomach and to dissolve smoothly in the non-acidic conditions of the intestine
• BB536 one of the most studied species in the world